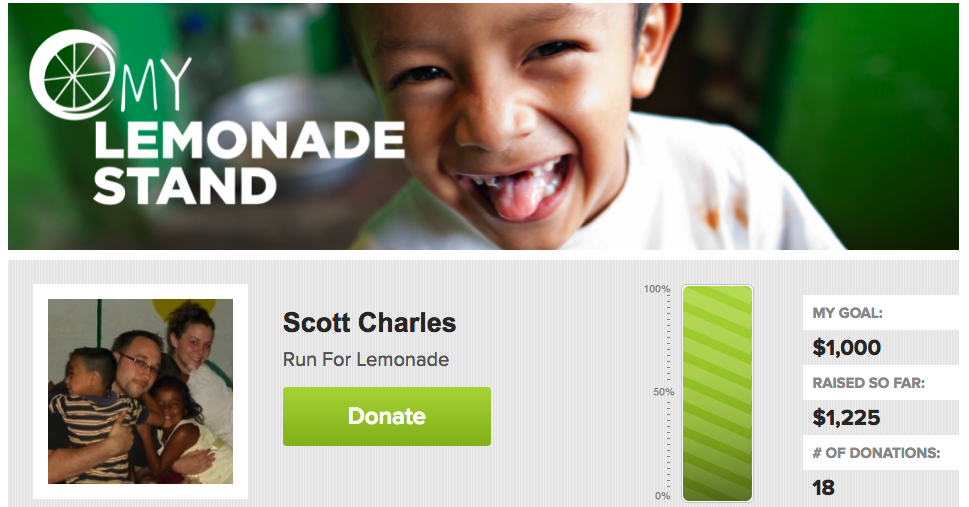 Scott Charles, a super-advocate and long-time child sponsor, challenged his friends and family to support his online Lemonade Stand, ‪#‎RunForLemonade,‬ and blew his financial goal out of the water! Today he shares about how God has wired him to run, accomplish hard things, and find creative ways to love the children of La Limonada. We are incredibly inspired by the impact he chose to make through running! 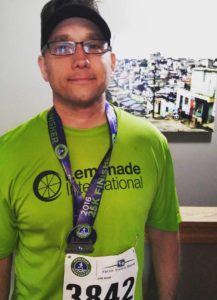 In March of 2008 I decided that I’d like to start getting into running. I don’t really remember why except that I liked a challenge and I’m not one to back down. Mind you, no one actually challenged me. It was my own doing; I’m a glutton for punishment. When I first started, a quarter of a mile almost killed me. At the time I was in great shape, but being into bodybuilding meant I really didn’t do as much cardio as I should have. Those next two months were hard, but then in May of that year I ran my first 5K since I was in high school. I didn’t do too bad either, a little over 26 minutes.

Over the course of the next few years I kept running, always trying to better my times. Finally in the summer of 2010 I decided I was going to run my first half marathon. I thought I was crazy, but still crazy enough to push myself and try. In October of that year I completed my first half marathon in just over two hours! I thought to myself, “was that it”? Don’t get me wrong, it was hard. But I knew I could push myself even further. Finally, in the spring of 2012 I decided I was going to run the Grand Rapids Marathon later that fall. That summer was pivotal, and after completing that marathon, I was hooked. I had to run more.

By the time this blog post is published I’ll have run four marathons (26.2 miles), five 25Ks (15.5 miles) and five half marathons (13.1 miles) since the fall of 2010. Not including the almost 5,700 training miles I’ve done in the last 5 years. Needless to say, God has wired something in me to find the hard things and do them. That’s also why in 2011, I stepped into the La Limonada slum in Guatemala City.

Physically, this was not a hard thing for me to do. But mentally and emotionally, I knew I was about to get wrecked. Little did I know how much my decision to go would affect the rest of my life. To say it wrecked me would be an understatement. Never in my life had I felt so much heartache for so many people. I came to La Limonada to help make a difference, but little did I know my life and perspective would have been impacted the most.

I love the people of Guatemala and La Limonada. To serve them as my life’s work would be a great honor. However, back in November of 2015 I didn’t know what that would look like while in Jenison, Michigan. That’s when I thought, there is a way I can serve them, even from so many miles away. I decided to use my love for running to help change the lives of the people I have come to love who are so far away. I got online and signed up for my fourth marathon, the Rock ‘n’ Roll Nashville Marathon. After that I went to the Lemonade International website and set up a Lemonade Stand. Then I started training for the marathon and working on getting the word out on social media. The fundraising was a little slow going at first so I decided to extend the length of my Lemonade Stand by two weeks. 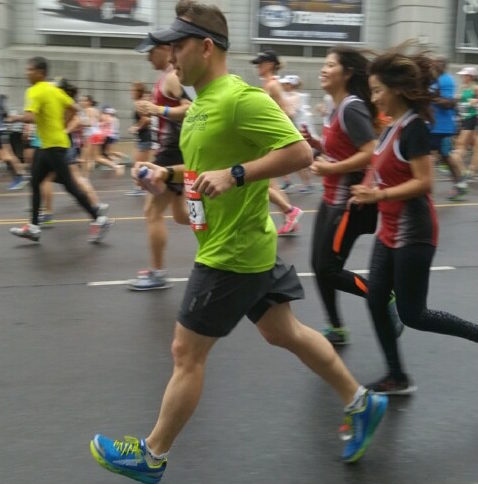 Because of the extension I decided to run the Fifth Third River Bank Run 25K in Grand Rapids, Michigan. I’ve run this race before but now I was running for a greater purpose – so that the children of La Limonada might have clothes to wear, food to eat, an education, and a chance to experience the love and gospel of Jesus.

Today, as I’m writing this I just completed the 25K this morning. I’m tired from the several months of training for both races but my heart is full knowing that I used my gifts and abilities to make a difference in the lives of children who need so much.

How can you make a difference? You don’t need to have lots of money, influence, or position. You only need the love of Jesus and the gifts and abilities he’s already given you. Use them – that’s why He gave them to you!

My prayer is that God would use me and those of you reading this, to further his love and Gospel to change the lives of those in La Limonada that we have all come to know and love.